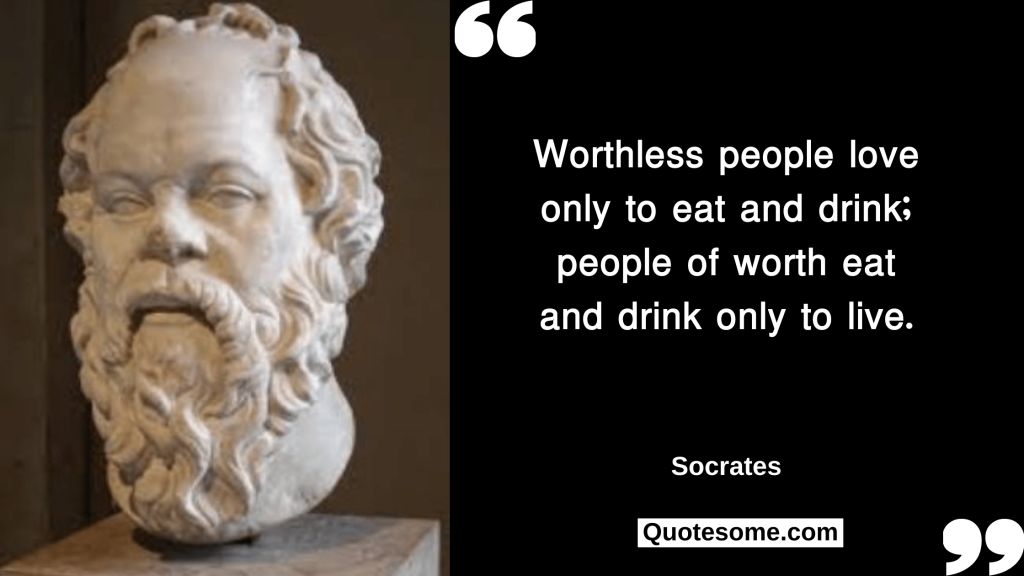 Socrates lived from 469- 399 BCE. As he was in his life for many, he remains an inscrutable, enigmatic individual who changed the world’s perceived philosophy. Despite having written nothing, he is considered one of the handfuls of philosophers who changed the way philosophy is conceived forever. Almost all information about him is second-hand and often vigorously disputed.

The myth about his academic discipline and influence on people of every age reached fame due to his unfair trial and death at the orthodox Athenian society’s hands. Ironically, he is adulation with God’s reverence by his admirers when he spent his whole life making people think about their ideas instead of blindly following anything.

He was convicted and executed for blasphemy towards the Gods, and now he is given the status of one. He has a strong influence on the Western philosophical tradition and modern-day philosophers.

To be contented doesn’t mean to stop desiring more but it means to be thankful for what you have and patiently waiting for the forthcoming. But certain people are never contented with what they possess and always holds a resentment with god to have more of what they have. Such people are never satisfied no matter how much they are poured with. There cravings and desires range to infinite and for which they are always uncontented and unhappy.

“If a man is proud of his wealth, he should not be praised until it is known how he employs it”- Socrates

According to Socrates, a man should not be praised for the wealth he holds. He should be praised after knowing how he had made use of wealth. Though there are many wealthy people very few of them spend their money wisely or for a good cause.

“Our prayers should be for blessings in general, for God knows best what is good for us”- Socrates

We all wish for ourselves and our beloved according to our contentment. But Socrates says that we should pray in general for good mental and physical wellbeing. We should keep everyone in our prayers without holding any grudge And the rest, god knows what our desires are and how much he should bestow us with which is good for us.

A good marriage is that in which each appoints the other the guardian of solitude. They prove to be each other’s strength in the weak phases of life and encourage each other to bestow their best part. So Socrates says, marry by all means, if luck favors and you get a good wife then be happy. Otherwise, be a philosopher and write theories of marriage.These can be helpful to others who are in the same situation as yours or going to be in.

“Nature has given us two ears, two eyes and but one tongue to the end that we should hear and see more than we speak”- Socrates

We are bestowed with two eyes and two ears and only one tongue. This implies we should keep our eyes and ears more active than our tongue. Our eyes hold the power to sight and ears for hearing. But tongue has a wise and most important job of speaking. It has the most critical job to be done since once word spoken cannot be taken back. So Socrates claims to use the ears and eyes more than the tongue. The tongue should be used wisely, as we should be aware of when to speak and when to remain silent.

According to Socrates,people who have nothing much to do or are idlers come under the category of “just living to eat and drink well”. Whereas some people having worthful work and are even determined towards their job. Such workaholic claims to eat just for living. They don’t give wide importance to food and drinks,despite earning well. They just eat and drink for the sake of living.

“No evil can happen to a good man, either in life or after death.he and he is not neglected by the gods”- Socrates

Nothing wrong can happen to a man with good motives and deeds. While living or after death,no evils can happen to him. Because the almighty never neglects the good deeds of a man.Never did he forget to reward him for his good deeds.

“I wish only that ordinary people had an unlimited capacity for harming; then they might have an unlimited power for doing good.”- Socrates

Socrates wished the ordinary people to possess an unlimited power for doing good as they had an unlimited capacity to harm. We the ordinary people knowingly or unknowingly hurt others mentally or physically. Without giving a fair chance of regretting it. We sometimes take everything and everyone around us for granted. And that where we make a mistake of not knowing when to use the power of doing good to others. We always think twice before making a move to do good for others. Even a percent of it if we thought before hurting, we would have more followers than haters.

“True wisdom comes to each of us when we realize how little we understand about life, ourselves, and the world around us”- Socrates

Little do we know about life,ourselves, and the world around us. And when we accept this truth of knowing little,we ignite a desire to learn more.We make our first move towards divine knowledge. When we acknowledge the fact that nothing happens according to our will,we make ourselves free from the bondage. Setting ourselves free and now we are ready to take and accept the guidance of the omnipotent.