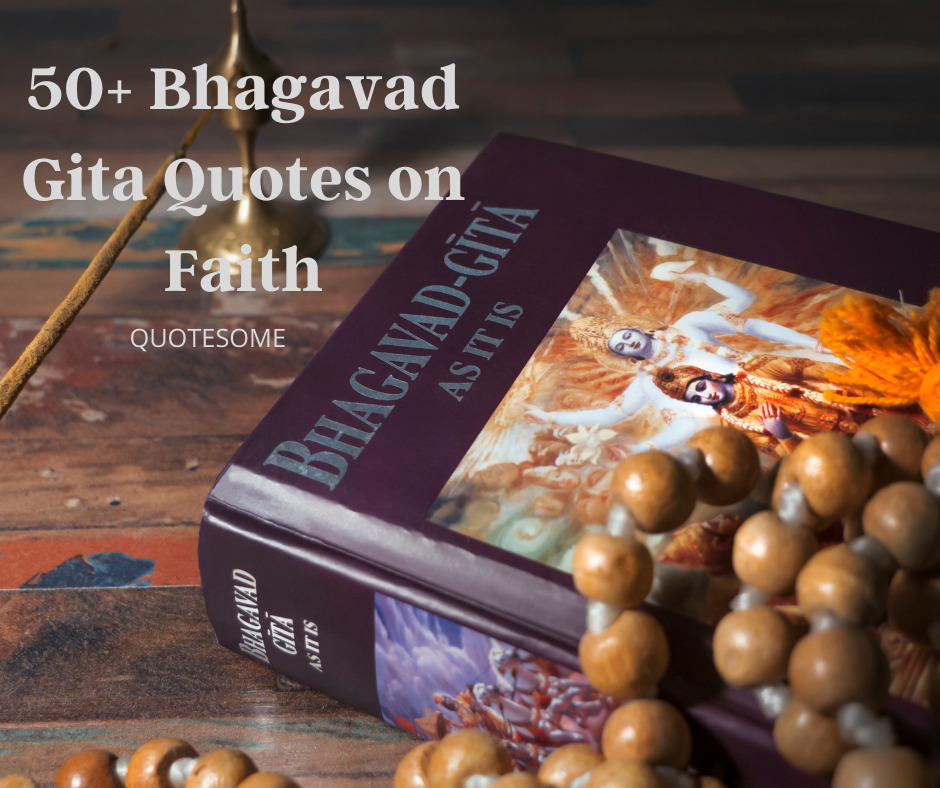 The world is imprisoned by selfish action. Act selflessly and without regard for personal gain.

Here the lord Krishna advices on how to keep your faith on the process instead of the outcome.

The mind is restless and difficult to control, but it can be subdued through practice.

Once you control your mind, you can gain confidence over any task you want.

There was never a time when you and I did not exist, and there will never be a time when we do. As the same person inhabits the body throughout childhood, adolescence, and old age, he also attains another body at the time of death. These changes do not fool the wise.

Don’t let the transition phases of life shake your belief on your noble core principles.

Like Buddha says, the end of YOUR expectations is the end of your sorrow. In short, expecting nothing does wonders and helps you work with highest level of faith. Please note, here expecting nothing does not mean you will work for free in the society, it just means, when you expect nothing and trust the universe with its process, you laser all your focus on the task in hand and produce extra ordinary results. THAT BRINGS YOU FAME AND DESIRED OUTCOME WITHOUT ANY RESISTANCE.

Still your mind in me, still yourself in me, and without a doubt, you will be united with me in your heart.

Still your affirmations in a suprepower like a salt dissolves itself in the water and you shall be rewarded for your faith for sure.

Let go of your fear. Be fearless and believe in the divine. Man does not achieve action freedom by refraining from acting. He does not achieve supreme perfection through renunciation alone.

As a person discards worn-out clothes in favor of new ones, the Self, who lives within, acquires a new body when it is worn out.

I extinguish the darkness of their ignorance out of compassion. I light the lamp of wisdom within them, dispelling all darkness from their lives.

No work can stain a man who is pure, in harmony, in command of his life, and whose soul is one with the soul of all.

Any material sacrifice pales in comparison to the sacrifice of knowledge.

He who has experienced the unity of life sees his own self in all beings, and all beings in his own Self, and views everything objectively.

Make whatever you do an offering to me: the food you eat, the sacrifices you make, the assistance you provide, even your sufferings.

It is preferable to live your own destiny imperfectly rather than live a perfect imitation of someone else’s life.

A gift is pure when it is given from the heart to the right person at the right time and in the right place, with no expectation of return.

There is no happiness in this world or elsewhere for the person who constantly doubts.

When a person reacts to the joys and sorrows of others as if they were his own, he has reached the pinnacle of spiritual union.

I create over and over again, curving within myself.

No one who does good will ever suffer a misfortune, either here or in the world to come.

God’s peace is with those who have harmony between their mind and soul, who are free of desire and wrath, and who are aware of their own soul.

In the same way that ignorant people perform their duties with an attachment to the outcome, the wise should act without attachment in order to lead people in the right direction.

Desire is said to be nurtured in the senses, mind, and intellect. Desire obscures one’s vision and deludes the embodied soul through them.

Weapons and fire cannot shred or burn the soul. It cannot be wet or dried by water or wind.

The presence of negativity is not the issue. The issue arises when that negativity permeates your being.

Those who follow my teachings with profound faith and without reservation are freed from the bonds of karma.

Those who devote their actions to God, abandoning all attachment, remain sinless, just as a lotus leaf is waterless.

Divine knowledge is attained by those who have deep faith and have practiced controlling their mind and senses. They quickly achieve everlasting supreme peace through such transcendental knowledge.

Whatever action a great man takes, ordinary men follow in his footsteps, and whatever standards he sets by exemplary acts, the entire world strives to meet.

Even the most astute observer’s knowledge is obscured by this ever-present foe in the form of insatiable desire, which is never satisfied and burns like fire.

God is uninvolved in anyone’s sinful or virtuous actions. Living entities are deluded because their inner knowledge is obscured by ignorance.

Be steadfast in your duty, letting go of attachments to success and failure. Yog is the name given to such tranquility.

As a lit fire reduces wood to ash, so does fire knowledge reduce all reactions to material activities to ash.

Elevate yourself by using your mind’s power. Don’t put yourself down. The mind can be both your best friend and your worst enemy.

We are prevented from reaching our goal not by obstacles, but by a clear path to a less important goal.

The reduction of desires is the key to happiness.

The supreme self of the self-controlled and peaceful man is balanced in cold and heat, pleasure and pain, and honor and disgrace.

Those whose minds are established inequity of vision overcome the cycle of birth and death in this life. They have the perfect qualities of God and thus sit in absolute truth.

The mind is indeed difficult to control, but with practise and detachment, it can be tamed.

To improve oneself, one should strive and employ oneself. One should never dishonor oneself. The self is both one’s friend and one’s foe.

You have the right to work, but never to the fruits of your labour. You should never act for the sake of receiving a reward, nor should you yearn for inaction.

Man is formed by his beliefs. He is as he believes.

There is no such thing as this world or the world beyond  nor happiness for the skeptic.

We are prevented from reaching our goal not by obstacles, but by a clear path to a less important goal.

Strive to serve the welfare of the world on a continuous basis; devotion to selfless work leads to the ultimate goal of life. Always do your work with the well-being of others in mind.