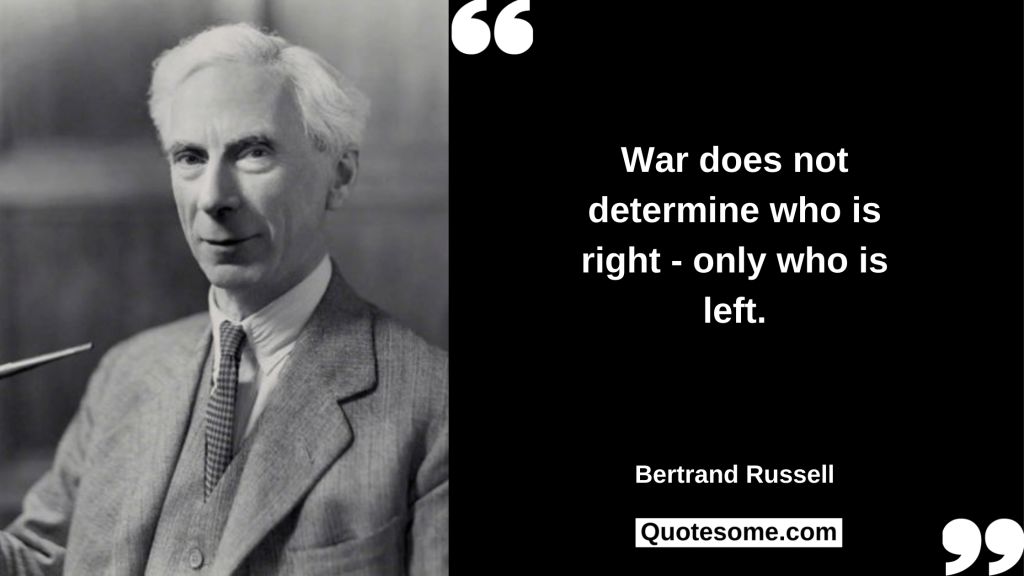 Bertrand Arthur William Russell is the 3rd Earl Russell, born in 1872 to one of the British Aristocracy’s influential and liberal families. He was a Nobel laureate, political activist, social critic, writer, historian, mathematician, logician, philosopher, and polymath.

Throughout his life, he considered himself a pacifist, socialist, and liberal. He has been widely held as a premier 20th-century logician. He co-wrote “Principia Mathematica” with A.N. Whitehead. It was an attempt to create a logical basis for mathematics.

This is regarded as a definitive work of classical logic. A paradigm of philosophy is what people call his philosophical essay “On Denoting.” He never really supported war during world war.

He famously said that nuclear advancement by the Allies was the necessary evil against Hitler. Always forthright with his opinions, he had numerous affairs in his life, but like his writings, he always had logical reasoning for everything.

War does not determine who is right – only who is left.- Bertrand Russell

not fear to be eccentric in opinion, for every opinion now accepted was once eccentric.- Bertrand Russell

To be without some of the things you want is an indispensable part of happiness.- Bertrand Russell

The demand for certainty is one which is natural to man, but is nevertheless an intellectual vice.- Bertrand Russell

I would never die for my beliefs because I might be wrong.- Bertrand Russell

The hardest thing to learn in life is which bridge to cross and which to burn.- Bertrand Russell

Ethics is in origin the art of recommending to others the sacrifices required for cooperation with oneself.- Bertrand Russell

It has been said that man is a rational animal. All my life I have been searching for evidence which could support this.- Bertrand Russell

Freedom in general may be defined as the absence of obstacles to the realization of desires.- Bertrand Russell