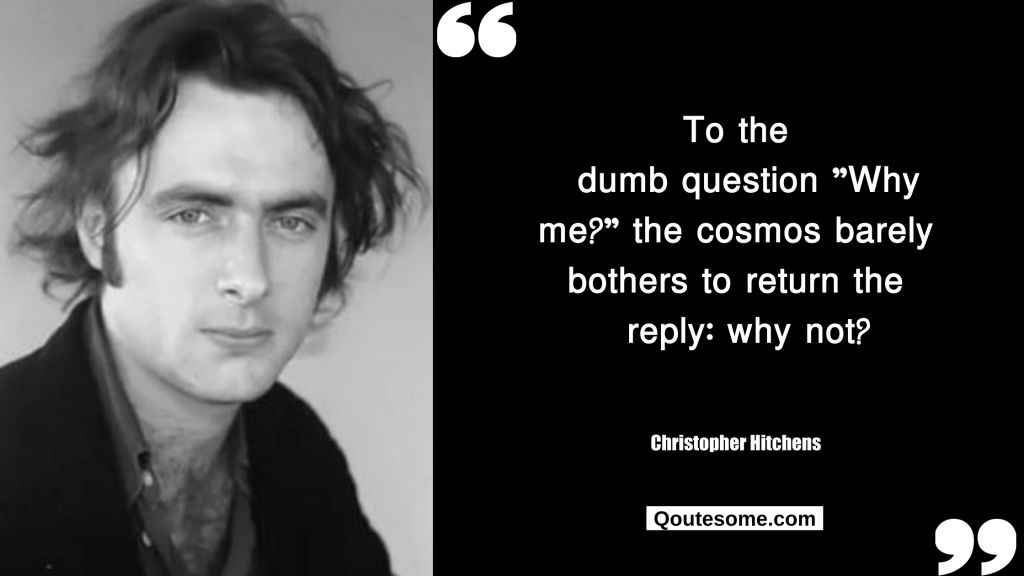 That which claims to be right without any proof can easily be dismissed without evidence. When we claim life insurance without any officials formats and receipts.
In case of any mishaps,we can’t claim our money at the time of emergency.
Thus, while purchasing, goods it’s always advisable to seek the receipt. Otherwise after finding any malfunctioning of the goods,when you seek for exchange procedure,the owner may deny that the product doesn’t belong to him.

To terrify children with the image of hell, to consider woman an inferior creation – is that good for the world.– Christopher Hitchens

Considering, women to be inferior to men exist in every stratum of society. Well, its manifested in families where poverty had struck hard.
Now the women have prioritized themselves second to man,even after excelling in various fields of life.
Similarly, we scare children to make them fall asleep by the name of the ghost.
We unknowingly create a space for fear in their mind. This space has a long-term impact on them.
As we create such a stigma of fears during the childhood of kids. Similarly, society haunts women in the name of their cultural norms and beliefs.
By doing these are we building a safe and good world? We should always question ourselves before imprinting our so-called norms and formulae.

Everybody does have a book in then, but in most cases, that’s where it should stay.- Christopher Hitchens

We say it’s easy to accept a person whose life is like an “open book”.
But in reality, it takes a lot of guts to be like an “openbook” and disclose all the secrets and mistakes of your life to someone.
Adding to its cons, the listener should be understandable enough to accept you with your faults and honesty. So it’s advisable to keep your book to yourself to some extent.
Though all don’t possess the same potential to understand your situation and to you too. Maybe it’s not their fault, as they have not been in the same situation as you were in.
Thus it’s you who know how,where, and when to act with your wits. It’s not mandatory to be an “open book” to prove your honesty.

Human decency is not derived from religion. It precedes it.-Christopher Hitchens

India is home to 1.4 billion people, following a different religion. Almost 94% of the world’s Hindus live in India,
while a substantial population of Sikhs, Muslims, Buddhists, Jains, and other folks. India follows the concept of unity in diversity and serves secularism.
But now even we have a misconception that people act according to their religion. We believe that Hindus are polite and humble whereas Muslims are haughty and cold-blooded.
Now its high time to accept that decency of humans is not derived from religion. It exists before it.

The essence of the independent mind lies not in what it thinks, but in how it thinks.- Christopher Hitchens

Two friends wanted to score good marks in their exams.
One decided to use malpractice to score more while the other labored hard to keep up his marks. Here we see both friends have the same destination to reach, but the journey they took was different.
We all know there are no shortcuts to success. Even if it does then it prevails for a small period.
So it’s very important to plan your journey before getting excited about reaching the destination.

What do you most value in your friends? Their continued existence. – Christopher Hitchens

Life is easier with friends. We attract people of the same vibes and form a tribe.
Friends are not those who will always be with you.
But whenever you feel low or fall apart off the track. They will always be by your side. This belief and trust make your bond pious and precious.
So do you think only continued existence matters in friendship? To some extent, it would be extant and trust that makes a relationship healthy and long-lasting.

What do you most value in your friends? Their continued existence.- Christopher Hitchens

When we demand something out of the box, it commensurate extraordinary pieces of evidence to prove it.
When there exists a majority of protagonists, then to fight as an antagonist you need exceptional evidence to stand against them and with your conscience.

To the dumb question “why me?” the cosmos barely bothers to return the reply: why not?- Christopher Hitchens

During the time of grievance, we always ask “Why me?”.
We never ask this at the time of joy and while being mirthful.
This just may occur as we always hope for a happy ending or an unforgettable beginning or a smooth-driven present.
To this dumb question of ours, the universe barely replies with “Why not?” The “why not?” here claims if you accept the mirthfulness with so much of positivity, then you are ought to bear the inevitable fear or sorrows with such vibes.