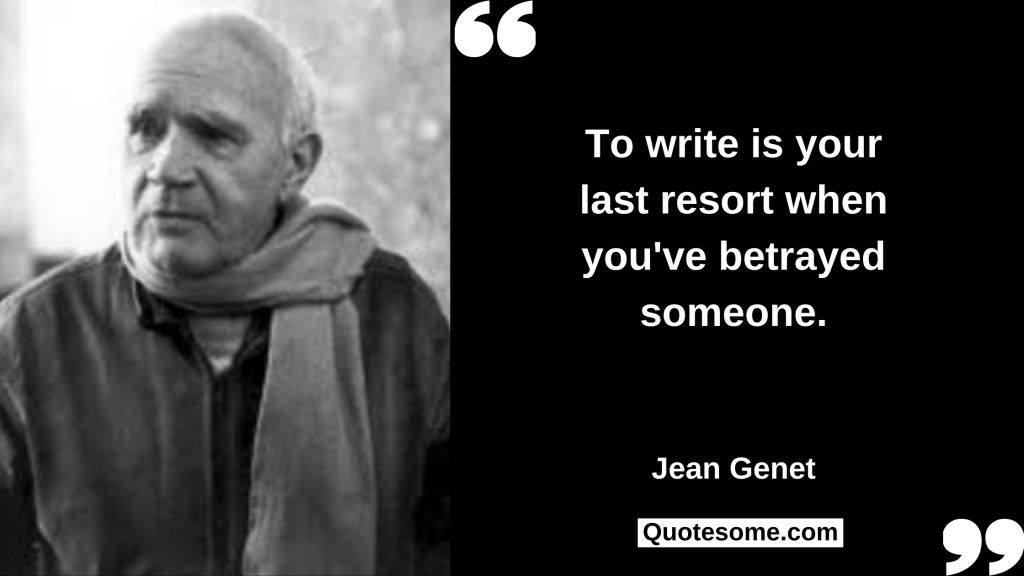 Jean Genet lived from December 19, 1910 – April 15, 1986. He was a French playwright, novelist, essayist, poet, and political activist. In the early days of his life, he was a petty criminal and vagabond.

He later took to writing, and some of his notable works are- The Screens, The Maids, The Balcony, Our Lady of the Flowers, and The Thief’s Journal. In his early works, he subverts the traditional sets of moral values, celebrates beauty in evil, raises violent criminals to icons, and emphasizes his singularity, specificity of gay gestures, and depiction and coding of betrayal scenes.

The Thief’s Journal (Journal du voleur 1949) and Miracle of the Rose (Miracle de la rose 1946) describe his experiences as a prostitute and vagabond across Europe. Our Lady of the Flowers (Notre Dame des Fleurs 1943) is about the prison underworld. He has also written several plays that stylize the ritualistic struggles between outcasts and their oppressors of various kinds.

The parody of social identities and complex manipulation of dramatic fiction is another way he layers his characters. His stories and plays display some of the unchartered and dark parts of human existence.

A man must dream a long time in order to act with grandeur, and dreaming is nursed in darkness.- Jean Genet

The main object of a revolution is the liberation of man… not the interpretation and application of some transcendental ideology.- Jean Genet

Crimes of which a people is ashamed constitute its real history. The same is true of man.- Jean Genet

Anyone who hasn’t experienced the ecstasy of betrayal knows nothing of ecstasy at all.- Jean Genet

Worse than not realizing the dreams of your youth would be to have been young and never dreamed at all.- Jean Genet

They spent their time doing nothing… they let intimacy fuse them.- Jean Genet

I recognize in thieves, traitors and murderers, in the ruthless and the cunning, a deep beauty – a sunken beauty.- Jean Genet

To write is your last resort when you’ve betrayed someone.- Jean Genet

Though they may not always be handsome men doomed to evil posses the manly virtues.- Jean Genet