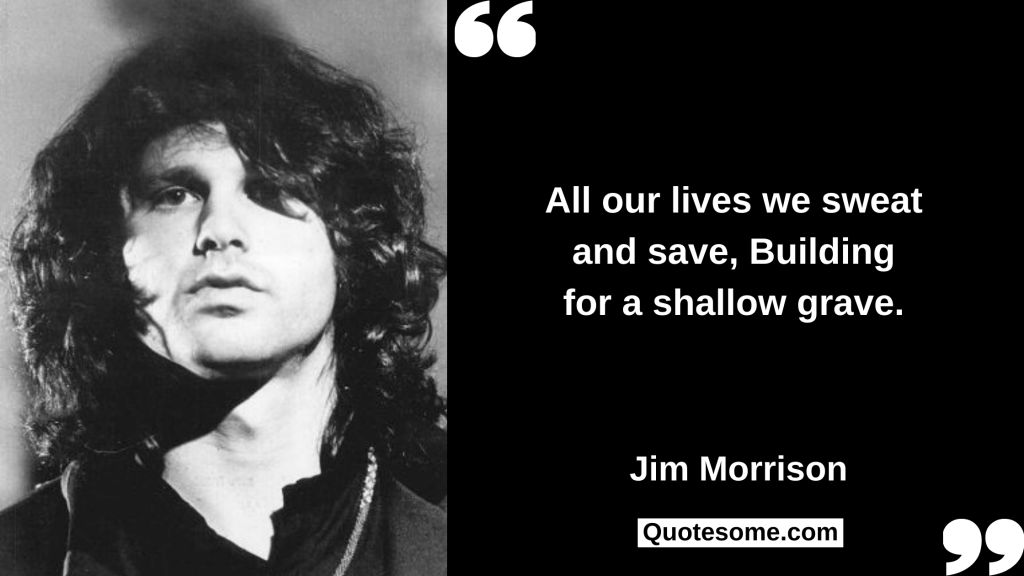 Jim Douglas Morrison was the lead vocalist of the rock band The Doors. He was an American songwriter, singer, and poet. He isregarded as one of the most influential and iconic frontmen in rock history by his critics and fans.

His fame comes from his poetic lyrics, unpredictable and erratic performances, his widely recognized voice, wild personality, and the dramatic circumstances of his life and death. His character displayed the youth counter culture and rebellious nature of the current generation.

He dies unexpectedly at the age of 27 in Paris, and as an autopsy was not performed, his death remains disputed.  Right before his death, he exited from his band, after which it lost its popularity. He has been inducted in the Rock and Roll Hall of Fame as a member of the Doors.

A friend is someone who gives you total freedom to be yourself.- Jim Morrison

I like people who shake other people up and make them feel uncomfortable.- Jim Morrison

Death makes angels of us all and gives us wings where we had shoulders round as ravens claws.- Jim Morrison

There are no laws, there are no rules, just grab your friend and love him.- Jim Morrison

Out here on the perimeter there are no stars. Out here we is stoned. Immaculate.- Jim Morrison

Each generation wants new symbols, new people, new names. They want to divorce themselves from their predecessors.- Jim Morrison

There are things known and things unknown and in between are the doors.- Jim Morrison

Listen, real poetry doesn’t say anything; it just ticks off the possibilities. Opens all doors. You can walk through any one that suits you.- Jim Morrison

I think in art, but especially in films, people are trying to confirm their own existences.- Jim Morrison

All our lives we sweat and save, Building for a shallow grave.- Jim Morrison