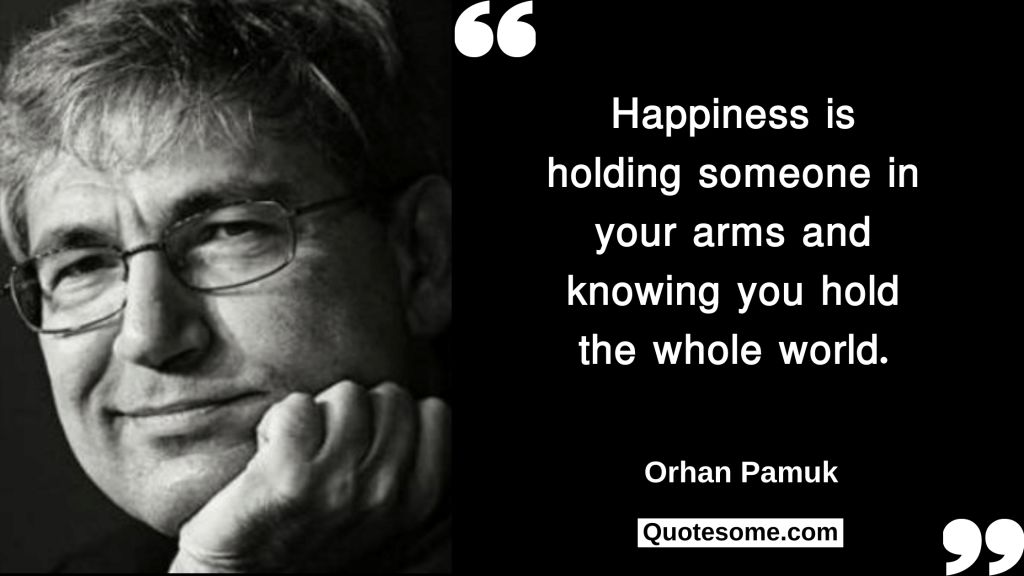 Ferit Orhan Pamuk was born on June 7, 1952. He is a Turkish academic, screenwriter, and novelist. He is the prominent and bestselling Novelist in Turkey who won the Nobel Prize in Literature in 2006.

He has sold over thirteen million books in sixty- three languages. Some of his works are- The Red-Haired Woman, A Strangeness in My Mind, The Museum of Innocence, My Name Is Red Snow, The New Life, The Black Book, The White Castle, and Silent House.

He teaches comparative literature and writing in the Humanities department of Columbia University. In 2018, he was elected to the American Philosophical Society. He is also the recipient of several literary awards- the 2003 International Dublin Literary Award, 2002 Premio Grinzane Cavour, and 2002 Prix du Meilleur Livre Étranger.

His books are characteristic of topics like loss or confusion of identity brought about by the conflict between eastern and western lives. His stories are often unsettling or disturbing and include complex characters or plots. His works touch on topics of differences between traditionalism and secularism, above all the deep-rooted tensions between the Eastern and Western Culture.

His books are characteristic of topics like loss or confusion of identity brought about by the conflict between eastern and western lives. His stories are often unsettling or disturbing and include complex characters or plots. His works touch on topics of differences between traditionalism and secularism, above all the deep-rooted tensions between the Eastern and Western Culture.

These are the few lines from orphan Pamuk’s masterpiece ‘the black book(1990)’. Galip is a lawyer, living in Istanbul. His wife, the detective novel disappeared one-day.galip is in dilemma whether she had left him for her ex-husband or the cell, the newspaper columnist.

The above lines from his book tell that sometimes life hit us with an inevitable breakdown .and there is nothing in life as mysterious as the ‘life’ itself .but he also says writing consolation is a sole exception to it. Writing consolation is as surprising as life is, which we usually write after having a breakthrough maybe for ourselves or else to console others in times of pain.

I don’t like to make strong statements. i want to write strong novels… I keep my deep, radical things for my novels.

Orphan Pamuk received a novel prize for literature at a very young age of 53.After receiving the award, Pamuk felt the childhood happiness of being renowned like a prince.he kept on writing from an early age because it kept the child within him alive.

But the before being a novel prize awardee scenario was full of questions and hurdles for him.he was always questioned by people about what he gets for writing such strange things? he always felt like apologizing for his love for writing.

Though after receiving the award the people turned up with a tender and kind attitude towards him. Then mr.pamuk says that it would have been better if he had received the novel prize just after two weeks of his birth. This would have helped him to keep his writing work at a good pace along with a prince like the feeling of childhood.

The museum of Innocence’ is not about politics: it’s a love story, but I think it’s political in the scene that it wants to capture how a man suppresses a woman.

“the museum of innocence ” is another masterpiece of orphan Pamuk.It dealt with a love story between a rich businessman Kemal who was about to get engaged fell in love with Fusun, a poorer distance relative of his.

He maintained all physical and emotional relationship with Fusun but got engaged to another girl. Fusun disappeared after the engagement day. Unable to find Fusun, Kemal broke his engagement with the other girl. After 8 years of search by Kemal, he got to know that Fusun was married. He met Fusun and maintained a friendly relationship with her in-laws, and variously conveyed his love for Fusun.

Due to some illness, Fusun’s father died and Fusun got divorced from his husband. Thereafter Kemal and Fusun came together again and spend a night of love-making. But fate had something else stored for them, Fusun died. Out of love, Kemal converted the home and all her belongings into a museum. The author conveys the message, how a man played with two women.

At the age of 60, I am less experimental and more mature. I want most of all to convey my understanding of life.

At the age of 60, people get retired in most developed countries. They become to be known as seniors.

To appropriate an invention, be it artistic or technical, you have to have at least a part of your spirit embracing it so radically that you somehow change.

The invention is the change that we bring to its previous unit of products.Maybe it’s a technical or artistic invention, you have to devote part of your embracing spirit so thoroughly and systematic way that you feel the change within you after the completion of the process.

I have been attacked in Turkey more for my interviews than for my books. Political polemicists and columnists do not read novels there.

Orphan Pamuk was born in 1952, in Istanbul. He had enrolled in college for pursuing architecture but soon he realized his love for writings. He had written many novels about and its culture and its political extremities. He was awarded for his work in “my name is red”, a murder mystery set in the 16th-century.

“snow ” which conveys political radicalism and focuses on religious, confronted on political extremism of turkey. But according to mr.pamuk, he was been attacked several times for his interviews in Turkish as he is weak in Turkish and make stupid statements in Turkish.

My hero wants to belong too, but he doesn’t want to give up all the things he came to value in the west.

We all have someone in our life for whom we crave the most and you want him/her to stay beside you all time and even though he does want the same it is not possible sometimes because he/she has some duties and responsibilities towards his family and friends who had always been with him/her in various strata of his life.

When I paint, I definitely live in the present, like someone in a shower whistling or singing.

When someone paints, he lives in the present as it asks for his utmost concentration. Just like someone in a shower singing experiences a ‘deja-vu’ while being in the present scenario of relaxing under the shower, a million memories and thoughts surpassed him quickly.

Happiness is holding someone in your arms and knowing you hold the whole world.

Partners are never making a  perfect match with you.but stays with you in every situation that makes both of you imperfectly perfect.

When you know someone who can invoke all the emotions you have and some even you didn’t know you had. Someone who becomes the reason for your smile and the sunshine when you are low And the dictionary when you are out of words.

Then only you realize that you are holding your whole world in your arms with utmost love and respect.

The challenge is to lend conviction even to the voices which advocate views I find personally abhorrent, whether they are political Islamists or officers justifying a coup.