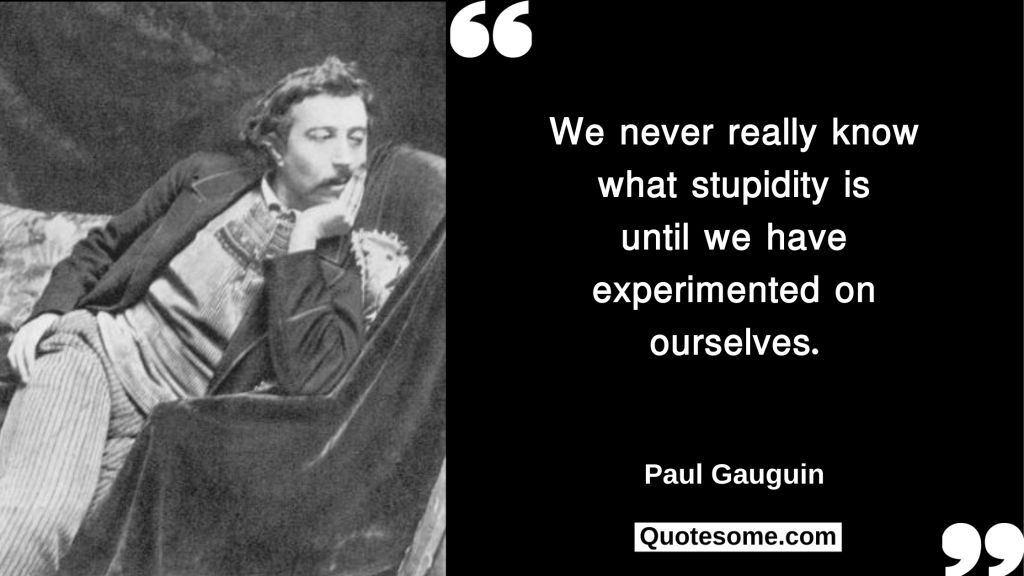 Paul Gauguin was a French post- Impressionist artist, sculptor, ceramist, printmaker, and writer and was a prominent figure in the early 1900s Symbolist art movement. His style involved stark contrasts, bold colors, and exaggerated body proportions that set his paintings apart from his other contemporaries.

He preferred staying in exotic environments and lived most of his life in Tahiti. By the end of his life, abandoned by family and friends, his health rapidly declined. He continued to suffer from an advanced case of syphilis and had experienced several heart attacks. By May of 1903, he was dead, a lonely man, at his isolated island home.

He dies in poverty, and it was only after his death that his art began receiving great acclaim, influencing artists like Henri Matisse and Pablo Picasso. Apart from painting, he was also an influential proponent of woodcuts and wood carvings as art forms.

It is so small a thing, the life of a man, and yet there is time to do great things, fragments of a common task.- Paul Gauguin

We never really know what stupidity is until we have experimented on ourselves.- Paul Gauguin

In art, all who have done something other than their predecessors have merited the epithet of revolutionary; and it is they alone who are masters.- Paul Gauguin

Stressing output is the key to improving productivity, while looking to increase activity can result in just the opposite.- Paul Gauguin

Life is hardly more than a fraction of a second. Such a little time to prepare oneself for eternity!- Paul Gauguin

It is the eye of ignorance that assigns a fixed and unchangeable color to every object; beware of this stumbling block.- Paul Gauguin

The history of modern art is also the history of the progressive loss of art’s audience. Art has increasingly become the concern of the artist and the bafflement of the public.- Paul Gauguin

Concentrate your strengths against your competitor’s relative weaknesses.- Paul Gauguin

There is always a heavy demand for fresh mediocrity. In every generation the least cultivated taste has the largest appetite.