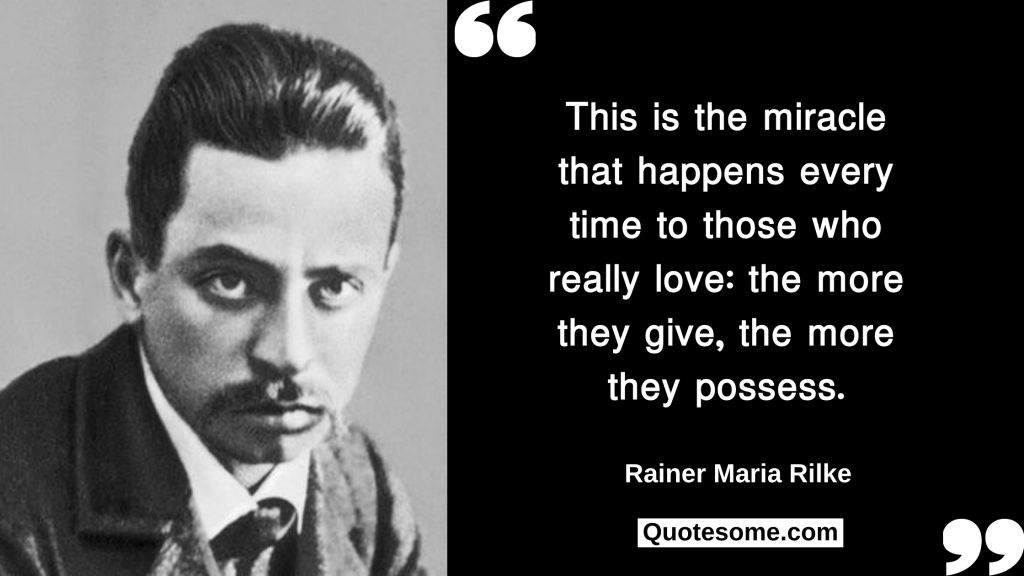 René Karl Wilhelm Johann Josef Maria Rilke was born on December 4, 1875, and died on December 29, 1926. A Bohemian- Austrian novelist and poet, he is better known as Rainer Maria Rilke. He is famous for being one of the most lyrically gratifying German- Language poets.

He wrote both highly lyrical prose and verse. Many critics have described his work as mystical. His writings include several collections of poetry, one novel, and many volumes of correspondence. He often muses about communion’s difficulty in an age of solitude, disbelief, and anxiety in his letters.

His writings often pose him transitioning between traditional and modern writers. In the late 20th century, he found new audiences when his works were frequently quoted by self-help authors, television programs, motion pictures, and books. In the USA, he remains one of the best selling poets of all time. In his later years, he settled in Switzerland, which inspired many of his poems.

“Perhaps everything terrible is in its deepest being something helpless that wants help from us.” – Rainer Maria Rilke

Being helpless is the starting of a crisis within yourself. At that stage, you feel like doing nothing. And even you miss out on your joy of life.
Being helpless is the saddest thing to experience. But at that instant, you realize that your helplessness seeks your attention and love.
During your tough times, when you are helpless and alone you know what worst the situation could turn, and you still can manage.
With helplessness, you develop anxiety and the only cure to this is love. When someone behaves terribly with you, deep down he too seeks out for your help. But his anxieties don’t allow him to ask for help. Despite seeking help, he behaves unfairly with you but he didn’t intend to do it.

“Let everything happen to you beauty and terror. Just keep going. No feeling is final.” – Rainer Maria Rilke

Don’t apologize for your feelings. As no feeling is final. When you hold a feeling of grudge towards someone. Remember three things: What good he had done for you?
What memories did you give him?
What memories did he give you?
Question these to yourself before holding a lifetime of resentment over him for a temporary feeling.
Similarly, it applies to happiness even. Many people will judge you for your feelings but stay intact to your instincts. Instincts never lie to you.
Before finalizing a feeling, always refer to your instinct.
Then go ahead without worrying about the beauty and terror it beholds to you.

“The work of the eyes is done. go now and do the heart-work for the images imprisoned within you.” – Rainer Maria Rilke

The only lasting beauty is the beauty of the heart. And eyes have the captivating power to mesmerize the beholder. Eyes help the beholder to observe someone or something and capture it within your mind.
The sync between the mind and eye helps you to imprison the image. The most beautiful things in the world cannot be seen or even touched, they must be felt with the heart. So let your heart do the job of developing feelings and bestowing the love that the image imprisoned deserves.

“Love consists of these two solitudes that meet, protect, and greet each other.” – Rainer Maria Rilke

When two solitudes start sharing their fears and embrace each other passionately, they start falling in love. “I trust you” is a better compliment than “I love you” because you may not always trust the person you love. But you can always love the person you trust.
Falling in love is easy but being in love with the same person forever takes a little effort of trust and transparency.
When you protect your partner it manifests your respect and cares towards him. Greeting each other makes you realize that you both got each other’s back even if the world is against you.

“A person isn’t who they are during the last conversation you had with them – they’re who they’ve been throughout your whole relationship.” – Rainer Maria Rilke

Someone praising you is also someone being judgemental. The difference is that you like the verdict this time.
Exactly when we try to derive conclusions from someone’s harsh behavior in the last conversation is.
While deriving the upshots we generally forget of the myriad memories we had with them. We just make there’s the last conversation a point to get apart.
But before taking a decision just look back over the past days. Does his last conversation match with his prolonged behavior throughout the relationship?
If yes then go ahead, but if no then might you should re-think.

“I hold this to be the highest task of a bond between two people: that each should stand guard over the solitude of the other.” – Rainer Maria Rilke

When two people are together in a bond then the most important task of them is to guard each other’s solitude.
Being in a relationship makes you taste every bitter and sweet flavor of it. When one enjoys the togetherness, then one should be there to safeguard the other in their solitude.
When you can share their solitude and assure them to hold their hands passionately. This makes your bond trust-worthy.

“It is spring again. The earth is like a child that knows poems by heart.” – Rainer Maria Rilke

The promise of spring’s arrival is enough to get anyone through the bitter winter.
The sunny and pleasant weather of the spring season makes the Earth giggle and dance like a child. Springtime is garden time, jumping time, and singing time.
With greenery surrounding the Mother-Earth, she joyfully recites the poems from her heart.

“Embrace your solitude and love it. Endure the pain it causes, and try to sing out with it. For those near to you are distant….”- Rainer Maria Rilke

Solitude is strength, to depend on the presence of a crowd is weakness. Solitude is painful in youth but delicious in the years of maturity. Endure the pain it causes and embrace your solitude and love it. Because it’s unknowingly making you strong and bold.
Feeling loneliness when you are alone is fine, but experiencing solitude in a crowd is dangerous.
This signifies that those near to you are distant.

“This is what the things can teach us: to fall, patiently to trust our heaviness. Even a bird has to do that before he can fly.” – Rainer Maria Rilke

When we fall in life, we always lose hope over ourselves. Being in despair, we become anxious and couldn’t make the right decision. Always keep your faith in yourself, no matter what the world holds against you.
No one knows about your strength more than you do. Even a bird has to fall several times before he can fly. The only thing he keeps intact is faith and courage to try again.

Every individual deserves to be loved and to love. This is the most blissful feeling to realize that someone cares for you. When two solitude’s are in love, they know that no matter what happens they will have each other’s support.
When you are in love you bestow your best of everything not to impress the other one, it’s because you love doing it for him.
Love owns the power of giving. We don’t count on our givings, we only keep a count of their smiles. The more you give, the more you possess them.
This giving and possessing develop sync which keeps your relationship in a frame forever.